Legalists: Read It and Weep 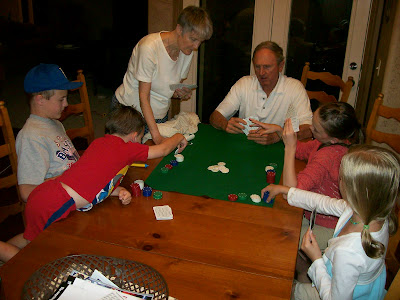 In his excellent book Putting Amazing Back into Grace, Michael Horton makes the point that legalism -- adding to God's Word -- drives people away from God.

That's why I wasn't too bothered when I wandered into my kitchen this evening only to hear my 67-year-old father exclaim, "Read 'em and weep!" You gotta love it when grandparents play poker with their grandchildren. (Look closely and you'll see a five-year-old essentially saying, "I'm in.") More Horton:

In their empirical study of the psychology of religion, Bernard Spilka, Ralph Hood, and Richard Gorsuch point out that numerous studies have concluded that "while Jews show the least abstinence from alcohol ... they possess extremely low rates for pathological drinking." On the other hand, "Methodists express negative attitudes toward drinking, yet a study of a college sample showed that 'more Methodist students drink to get intoxicated than any other group.'" The same irony shows up in Mormon samplings and other legalistic groups. On the other hand, "Judaism considers alcohol a gift of God that must not be abused," and "orthodox and conservative Jews become intoxicated less than their reform or secular coreligionists." Conclusion? "Alcoholism seems to be troublesome among groups that generally take the most negative stance toward unlimited drinking." This is just one example of how legalism can undermine law. Many of the most hardened secularists in society today were raised in repressive, authoritarian religious environments.

Legalism, adding to God's Word, continues to drive people away from God. That is one reason why adding to his commands is condemned equally with subtracting from them.