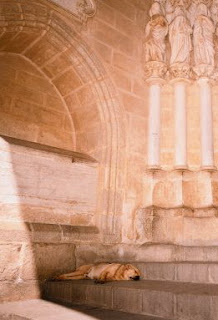 And regardless of species, apparently. The news story tells us that "pets were allowed to join their owners inside the church for the worship service." Sadly, "within moments of walking into the church's small chapel, Roscoe began acting up. The energetic 5-year-old Welsh corgi started barking, jumping on people -- all the while pulling his hapless mistress to and fro." In short, the whole episode was not terribly unlike the Toronto Blessing.

There's more. "Roscoe's partner in transgression crashed into the chapel a few moments later. Bandit, a 1-year-old border collie, stampeded into the room dragging his owner, Kenton Peters, along with him. Bandit began a short-lived pew jumping demonstration -- which ended as soon as Peters tightened his grip on the leash." Good to hear. Let all things be done decently and in order.

The reporter tells us that "the Rev. [you know it's comin'] Peggy [toldya] Risenhoover, the pastor, talked to the congregation while holding up her own pet friend -- a 9-week-old Boston terrier named Missie. While she preached a short sermon about the creation story found in the Old Testament, Risenhoover reminded the assembly about the importance of taking care of animals."

And reminded us all that liberals in the ghost-town denominations can be just as irreverent and irrelevant as evangelicals.
Email Post
Labels: Mainline Follies