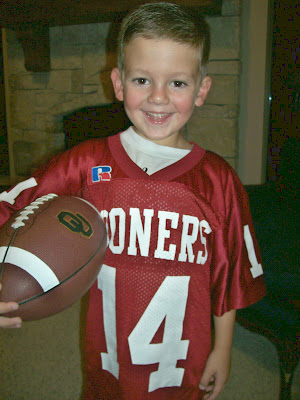 Jack Henry is still small enough for me to scoop up and smother with kisses. He doesn't always like it, but since I'm so much bigger than he is, he doesn't have a choice. He might be sitting on the couch watching Curious George and from out of nowhere I will descend upon him, squeezing him and kissing him. All he can do is squirm and laugh and say, "Mooooom!" Or he might walk past me and I grab him and smoother him again with kisses. I can't help it. He's like a magnet.

So today when I rounded the corner and there he was, I got ready to grab him and squeeze him. Only this time he was running towards me! My motherly heart swelled. I opened my arms and got ready, but at the last second he tucked in his arm, put his shoulder down, performed the Adrian Peterson signature move his older brother taught him, and pummeled me to the ground. And off he ran, squealing and yelling "Touchdown!"
Email Post
Labels: Friends and Family