... my friend Mark Nichols and I, seventh graders at Madison Junior High School in Bartlesville, had a friendly disagreement on who would win the 1979 national championship game that night between Magic Johnson's Michigan State Spartans (my pick) and Larry Bird's Indiana State Sycamores (Mark's pick). It's safe to say neither one of us had a clue what an historic game that would be, or how Magic and Bird would go on to revitalize the NBA and forever be linked in basketball history.

Nor did I realize in 1979 that more than two decades later I would go on to establish some fond basketball memories of my own thanks to a certain graduate assistant on that Michigan State team -- none other than Kelvin Sampson.

Well, fast forward 30 March Madnesses, and occupying the coveted real estate on the cover of Sports Illustrated -- two weeks in a row, no less, and the fourth time this season -- is an acquaintance of Mark's that both he and I are cheering for this time (a guy who is at OU, at least indirectly, because of that former graduate assistant at Michigan State).

Incidentally, between Blake Griffin and the Stoops-era gridders, the frequency with which OU is gracing the cover of SI is starting to get embarrassing. Just not as embarrassing as Mark picking Bird to beat Magic. 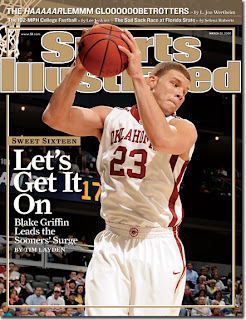 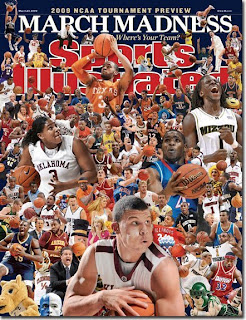