No Stiff-Arming the Lord 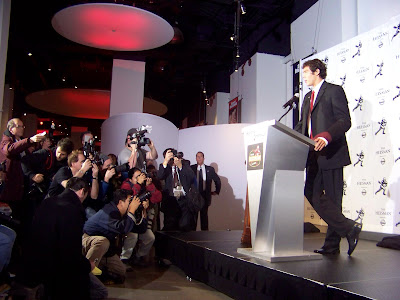 My friend Isabel (Izzy) Lyman covered the Heisman Trophy presentation last night and sends along this photo of the winner, Oklahoma's Sam Bradford.

"It's safe to say that God was at the Heismans," Izzy tells me. In his acceptance speech Bradford gave thanks to God, and later Tim Tebow thanked Bradford for giving God the credit. During the press conference Colt McCoy also talked about "the Lord's will."

"It was like attending a church service," Isabel tells me, "except the congregation was a bunch of cold, Northeastern liberals."
Email Post
Labels: Sooner Sports