Oklahoma now owns a 124-89 series lead after traveling to Stillwater tonight to defeat Oklahoma State by a score of 89-81. It was Oklahoma's seventh victory in their last nine meetings with the Cowboys. 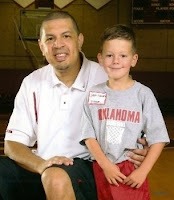 Sooner head coach Jeff Capel (pictured here with Jack Henry) is now 4-1 against the Cowboys. Jack Henry watched tonight's game with his brother on ESPN.com. His quote of the day -- and Sooner fans will recognize how astute this comment is, especially coming from a six year old -- had to be this: "Double coverage on Omar Leary -- that's odd."

Some folks might be surprised to learn that, according to a methodology developed by ESPN Research which ranks the best college basketball programs in the modern era, Oklahoma ranks an impressive 12th in the country, ahead of such storied programs as Indiana and Louisville. Oklahoma State comes in at a respectable number 32.
Email Post
Labels: Friends and Family Sooner Sports