A Year with the Institutes 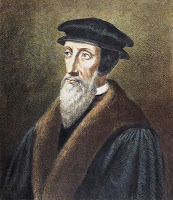 Christians the world over, including Lincoln and me, are celebrating the 500th anniversary of John Calvin’s birth this year by reading through The Institutes of the Christian Religion during 2009.

Ligon Duncan gives several reasons why this is a good idea. Among them:

Because it the most important book written in the last 500 years.

Because it is foundational for every Reformed systematic theology ever since.

Because Calvin was the best exegete in the history of Christianity.

Because Calvin is one of the five greatest theologians in Christian history.

Because you will know God better, if you read it prayerfully and believingly.

Because it's the 500th anniversary year of Calvin's birthday. Don't be a party pooper.

Sam Storms, pastor of Bridgeway Church in Oklahoma City, is joining the party. Dr. Storms (Ph.D. in intellectual history, University of Texas at Dallas) is planning to write one or two meditations each week on selected portions of the Institutes. Formerly an associate professor of theology at Wheaton College, Dr. Storms is the author of the book Chosen for Life: The Case for Divine Election (Crossway, 2007).

It's not too late to get started. Princeton Theological Seminary has the Institutes online; for a reading schedule, click here.
Email Post
Labels: Devotional Theology