The Confusion of Barack H. Obama

The president remarked last week that the sight of himself standing behind the official seal would "confuse" Gen. Robert E. Lee. It was a reminder that American history has been taught only selectively these past 20 years, even to the Harvard-educated.

General Lee never expressed the view that blacks would not achieve equality. In fact, it is not recorded that he ever spoke disparagingly of blacks, something that cannot be said of his Union counterpart, Ulysses Grant, or even Indiana's favorite son, Abe Lincoln. 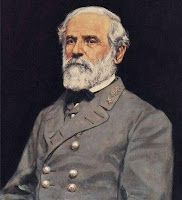 General Lee was emphatic that slavery was "a moral and political evil." He believed that American slaves would be free one day, and a decade before the Civil War he freed the slaves inherited by his wife. His decision to join the Confederacy was based on his and the founders' conviction that states should be sovereign over a federal government.

So, what would confuse Lee about modern life? A good guess is the dearth of liberty for even free men and women living in the reconstructed nation -- blacks, whites and all others.

Who, for instance, would like the job of explaining to the general that equality of opportunity had been suspended along with the Rule of Law in the pursuit of equality of results?

Or that it is common in 2009 for a middle-class professional, black or white, to live without owning real property, indentured to a hopeless mortgage, without savings, sending her children to schools on loans that will never be repaid?

General Lee would want to know how such a situation came about. He would have to be told that taxes and regulations now take as much as half of an average worker’s payroll allowance.

At that point one could only pray that the general did not ask the obvious next question: Where does all that money go? The answer -- that spending bills are so large that nobody really knows -- surely would be too much for his noble soul to bear.

In any case, it would be necessary to go further -- taxes on savings, income and capital gains, abortion rights, federally mandated state and municipal regulations, socialized medicine , restrictions on gun ownership ... The poor man’s heart would surely break.

Bringing the general fully up to date, he would want to know that Congress had in effect ordered banks to issue loans expressly to those who could not afford to pay them back and that Wall Street had learned to invest in an enterprise not on the basis of its productivity but on its political favor.

Who, finally, would want to introduce the general to Barney Frank? Nancy Pelosi? Rod Blagojevich?

Confused? That might not be a strong enough word, Mr. President.