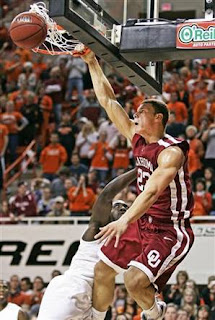 There's a very moving story in The Kansas City Star about "a quiet little boy who blossomed into a 6-foot-10 behemoth with a million-dollar contract waiting for him after college." Bill Reiter reports that Tommy and Gail Griffin

had a son, Taylor. They'd take him to day care, and he'd sit quietly and wait to be dropped off. Then they had a second son, Blake, and this time he didn't follow his brother's example. He'd wail and cry. He wanted to be with his family.

"He'd always start out the same way," Tommy said. "He'd put his arms out and start crying. So Gail's crying the whole way in the car. It broke her heart every time."

As a result, they settled on a decision: They would homeschool their kids. Gail waited until the end of the semester and then quit her job teaching. In the quiet comfort of their home, using the dining room table as the schoolhouse, they instilled their values in their children. Home became a shelter from what the Griffins view as an America less and less open to the presence of God in our lives.

"Home school helped them a lot," Tommy said. "Because it gave them a foundation. We've deviated (in America) from our past to where we are right now. Here's a nation founded on the opportunity for freedom of religion, and every time you look around, there’s people saying God has to be taken out of this, out of this."

This, too, shaped that little boy into the Blake Griffin now leading the Sooners: Faith paramount to life.

"Our plans are good, but God's plans are better," Tommy said.