A nationwide protest of "taxpayer tea parties" in 500 cities and towns is scheduled for tomorrow, USA Today reports. "The goal is to pressure Congress and states to reject government spending as a way out of the recession and build an anti-spending coalition around regular taxpayers." The newspaper quotes my friend Bridgett Wagner:

Bridgett Wagner, director of coalition relations at the conservative Heritage Foundation, sees a possible reprise of the tax revolt of the 1970s and '80s, when a California movement to slash and cap property taxes led to successful ballot measures from the West Coast to Michigan and Massachusetts. "These movements in the past have shown that when people have finally had enough, even the politicians at some point have to listen," says Wagner, calling it a "bottom-up" phenomenon. 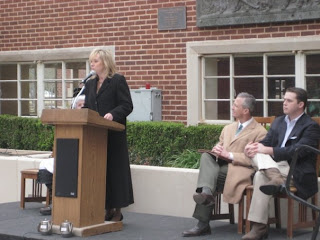 Though most of the tea parties are being held tomorrow (tax day), one was held yesterday on the campus of the University of Oklahoma. Speakers included Congresswoman Mary Fallin (pictured here), congressional candidate Kevin Calvey, labor commissioner candidate Jason Reese, and yours truly (among others). For my part, I delivered the following remarks:

It is fitting that this tea party should be held today, April 13, because today is Tax Freedom Day in these United States of America.

What is Tax Freedom Day? Well, according to the nonpartisan Tax Foundation, the average American this year had to work all of January, all of February, all of March, and the first 12 days of April just to earn enough money to be able to pay all his federal, state, and local taxes. Finally, today, April 13, we can start keeping the fruits of our labor. Thank God Almighty, we’re free at last.

Now, in one of life's quirky little ironies, today is not only Tax Freedom Day. Today is the 266th anniversary of the birth of Thomas Jefferson.

What do you think Jefferson would say to the notion of Americans having to work three and a half months to pay the tax collectors?

You may recall that this country was founded by people who were disgusted with big government and high taxes. And just how high were those taxes? One economic historian estimates that when Jefferson penned the Declaration of Independence, the tax burden imposed by the British Empire on the colonies was approximately 1 percent of national income in the North, and about 2.5 percent in the South. In other words, Tax Freedom Day for the patriots would have come around January 9. 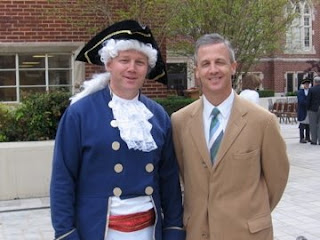 Dr. Rufus Fears, OU's indispensable historian of liberty, was in my office on Friday and reminded me that Jefferson and his fellow British subjects were the freest, most lightly taxed people in the world. And yet, they saw fit to declare their independence and take up arms against the greatest empire in the world. And, as Dr. Fears says, the focus of their grievances was taxes.

Well, fast forward 125 years, and you find that even as late as 1900 Tax Freedom Day came on January 22. Then as the years passed it moved to February, then March. According to author and tax lawyer Charles Adams, "By the mid-1900s, the American public had been so brainwashed about the virtue of taxation, and had become so ignorant of its true tax history and struggles, it is no wonder the statements of the Founders and leaders in the nineteenth century seem strange, almost bizarre. But just about all of them, for well over a century, believed that taxation — except for the essentials of government — was nothing more than 'legalized robbery,' a phrase they used repeatedly."

And today, as a Rasmussen poll last week discovered, only 53 percent of American adults believe capitalism is better than socialism. Twenty percent think socialism is better, and 27 percent (God love 'em) aren't sure which is better.

I find it interesting that today, April 13, is sandwiched between two very holy days. Yesterday, of course, was a holy day on which millions of Americans celebrated the resurrection of the Savior (no, I'm not talking about Barack Obama). A couple days from now, April 15, is another holy day. Indeed, it's the highest holy day of the year for statists who have great faith in the government and its tax collectors. Gene Healy, author of the book The Cult of the Presidency, says these people believe "in the promise of redemption through presidential politics. It's the idea that the president can save us. That when it comes to whatever it is that ails us — whether it's unemployment or hurricanes, divisiveness or spiritual malaise — the president has the cure." As Obama himself once said, with the right kind of leadership we can "create a Kingdom right here on earth."

No. We. Can't. And if these tax-and-spend politicians are really going to try, then your generation is going to be working a lot later into the year than April 13 to pay the tax collectors. Your generation should not be forced to work four or five or six months a year just to pay the tax man. I urge you to get involved in the political process, and to work towards moving Tax Freedom Day the other way, closer to where it was when Thomas Jefferson lived.

For as Jefferson said in his first inaugural address: "a wise and frugal Government ... shall leave [men] free to regulate their own pursuits of industry and improvement, and shall not take from the mouth of labor the bread it has earned."