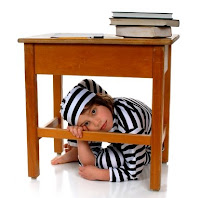 Gatto once wrote an essay called "Some Reflections on the Equivalencies Between Forced Schooling and Prison." I know, I know, it's overreaching to compare public schools -- oftentimes unsafe places (replete with with metal detectors and security guards) which are sometimes put on lockdown -- to prisons. But still. I couldn't help but think of Mr. Gatto's essay this morning when I read a story in The Oklahoman headlined "Edmond district ramps up security at school." Jesse Olivarez reports:

Bill Powell, the school's principal, said the system has taken some getting used to, but it has made his school safer. "This is a very, very secure school now," he said.

The new camera system gives school officials a panoramic view of the school with 36 cameras mounted at key points outside the building, giving administrators a view of everything happening on campus. ...

After classes start, all doors to the school automatically lock. People inside can walk out, but the doors will remain shut to those without a pass key. Visitors must now identify themselves and wait to be buzzed in before they can access the school.

The photo accompanying the story is priceless. The warden principal at this elementary school has a smile on his face ("Ain't this dandy?") as he demonstrates the boffo new security system.

Interestingly, in his latest book, Weapons of Mass Instruction: A Schoolteacher's Journey through the Dark World of Compulsory Schooling, Gatto shares a little tidbit about the father of America's current public school system:

Horace Mann himself called school "the best jail" to his financial backers, by which he meant that the jail you sentence your mind to when you go to school is harder to escape than any iron bars.