Transparency for the Fed

In an open letter which appeared today on page A5 of The Washington Times, I (on behalf of OCPA) joined with several other organizations in urging Congress to bring some transparency to the Fed. Here's an excerpt:

Since its inception, the Federal Reserve has operated without sufficient transparency or accountability to the American people. In fact, current law specifically excludes the Fed from a thorough audit or real congressional oversight. No government agency has such an utter lack of sunshine.

The Federal Reserve has created and dispersed trillions of dollars in response to our current ﬁnancial crisis. Americans across the nation, regardless of their opinion on the bailouts, want to know where that money has gone and exactly how much has been spent. 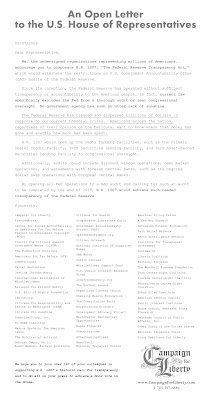