When I Want Your Opinion I'll Give It to You 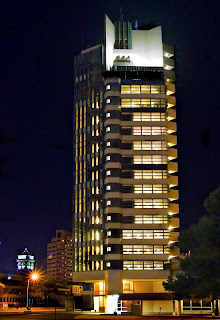 The June issue of Smithsonian magazine arrived in the mailbox the other day, and it features an article by Arthur Lubow entitled "The Triumph of Frank Lloyd Wright." I love this anecdote:

Wright said that his architecture always aimed to serve the client's needs. ... Toward the end of his life, he constructed his second and last skyscraper, the 19-story H. C. Price Company Office Tower (1952-56) in Bartlesville, Oklahoma. After it was completed, Wright appeared with his client at a convocation in town. "A person in the audience asked the question, 'What's your first prerequisite?'" archivist Pfeiffer recalled. "Mr. Wright said, 'Well, to fulfill a client's wishes.' To which Price said, 'I wanted a three-story building.' Mr. Wright said, 'You didn't know what you wanted.'"