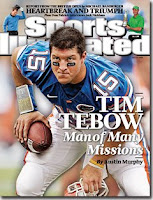 Yesterday's mail brought the latest issue of Sports Illustrated. And though the football fan in me is hoping for an assist from the SI cover jinx, the dad in me is loving this story from Tim Tebow's dad. "Have you heard the story of Timmy's birth?" Bob Tebow asks.

"When I was out in the mountains in Mindanao [in the Philippines], back in '86, I was showing a film and preaching that night. I was weeping over the millions of babies being [aborted] in America, and I prayed, 'God, if you give me a son, if you give me Timmy, I'll raise him to be a preacher.'" Not long after, Bob and Pam Tebow conceived their fifth child. It was a very difficult pregnancy. "The placenta was never properly attached, and there was bleeding from the get-go," Bob recalls. "We thought we'd lost him several times." Early in the pregnancy Pam contracted amebic dysentery, which briefly put her in a coma. Her doctors, fearful that medications they had given her had damaged the fetus, advised her to abort it. She refused, and on Aug. 14, 1987, Pam delivered a healthy if somewhat scrawny Timothy Richard Tebow.

"All his life, from the moment he could understand, I told him, 'You're a miracle baby,'" Bob recalls. "'God's got a purpose for you, and at some point I think He's going to call you to preach.'

"I asked God for a preacher, and he gave me a quarterback."