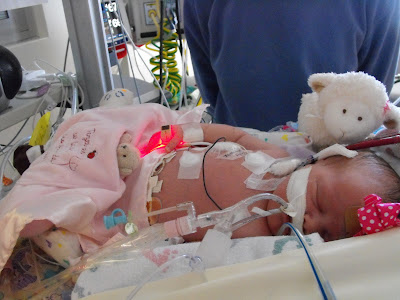 Before we came to Dallas, the doctors warned us that this journey with Anne Marie would be a "roller coaster." They were right. In the last few days Anne Marie has taken a few steps forward and a few steps back, and Brandon and I have had some emotional highs and lows.

Yesterday, Anne Marie had to start kidney dialysis to help get rid of some of the fluid. The medicine they had been giving her is hard on her kidneys, so they had to stop the medicine and begin dialysis. She also got a bit red and splotchy and her white count was a little high so her doctor thought she might have some kind of infection. She started antibiotics and her white count has gone back down, so that seemed to have helped.

Her doctor also did a treatment yesterday to expand her lungs a little more. She had an X-ray yesterday and it showed a little more lung than before. They are also continuing to slowly inflate her lung with the ventilator by turning it up a little more each day. Her doctor was very pleased with her X-ray this afternoon -- even I could see the improvement -- so we are very happy about that. (That's three days in a row that an X-ray has shown more lung than the day before.) They are also going to be a little more aggressive in turning down the ECMO flow to try and wean her from it just a little bit. 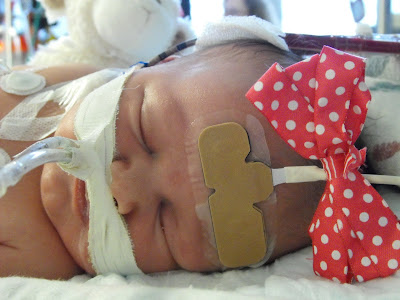 Anne Marie has several superb physicians giving input in her care. She has a main attending doctor, a cardiologist, and a pediatric surgeon, and the head of neonatology is also giving input. They all "put their heads together" to try to figure out the best course of treatment. And sometimes they don't always completely agree, which is normal. The surgeons really would like for babies to show more lung improvement and be off ECMO before they do surgery because of the high risk of bleeding in the chest cavity and/or abdominal cavity (ECMO makes the blood thinner). Her main attending doctor and the neonatologist agree that this is a very legitimate risk but believe that in her case she isn't going to show much lung improvement until the organs in her chest are moved down, so they really want to do the surgery while she is on ECMO (possibly in the next few days).

Another curve ball that has developed has to do with her heart. It is really squished over to the right and hard to see on an echocardiogram. The cardiologist can't really tell if it is just squished or if she might have a hypoplastic heart. Anne Marie had an extensive fetal echocardiogram three months ago in Houston, and the doctor there said that her heart was structurally normal, so we think it is just really squished and once the surgery is done it will function normally and shift back to the center of her chest. It is a concern to the doctors here because if it is a small heart then surgery is even riskier. The surgery is hard on a normal heart and even harder on a small heart. Right now they are treating her as just a CDH patient and not a CDH/heart patient. She will have another echo tomorrow to see if they can see anything different.

So that is where we stand right now. Here are some specific things we would ask you to pray for if you are so inclined: