When my oldest daughter, Lillie, was seven years old she broke her arm and had to have emergency surgery. Lincoln once ripped off part of his ear on an alpine slide in Colorado and had to have many stitches to fix it. Mary Margaret has also had a broken arm, and Jack Henry's only medical procedure has been a frenetomy. So Anne Marie, Lord willing, will one day have bragging rights when she is comparing stories with her brothers and sisters. She'll be able to say that she was on ECMO for 27 days, had her stomach in a silo for two weeks, and had two major operations and several other surgical procedures -- all in her first 30 days of life. When I pray for Anne Marie, I pray that one day she will be able to tell her story of how God preserved her life when it seemed so unlikely.

Her surgery today was supposed to take place in the operating room on the second floor, but early this morning her blood pressure dropped and the doctors thought it best to do surgery without moving her. So at about 12:30 the surgery team came to her room on the twelfth floor to prep. As I said in the previous post, the surgeon wasn't sure what things would look like once she opened the silo. We had been warned that when her stomach was pushed back into her abdomen that it might crowd her lungs a little and the doctors might have to increase the pressure on the vent because of this. We were also told that the surgeon might have to put on a more permanent silo if her stomach didn't fit into her abdomen. As it turns out, when the surgeon began she saw that Anne Marie's stomach had already dropped down into her abdomen and that what was left in the silo was just blood and clots, which were just washed away. The skin on her abdomen wouldn't completely close, so the surgeon put a biodegradable patch on; over time tissue will grow over this patch (and later when she is one or two she will have another surgery to repair this better). Also, since her stomach had already dropped into her abdomen she didn't have additional crowding on her lungs, which was a very good thing. She did very well during surgery and all her numbers remained good. The surgeon was also able to remove her two chest tubes, which is a good thing because the more tubes Anne Marie has the more sites there are for possible infection. We were thrilled when the surgeon came out at 3:30 and said things went well.

To sum up, God was once again merciful to us today. He brought Anne Marie over another hurdle. Her surgeon remarked to us today, almost in passing, "most of my partners can't believe she's still alive."

So, it's on to tomorrow. One neonatologist, though pleased with her progress, says Anne Marie's condition is still "very worrisome." The plan is to attempt to wean her from the ventilator, but there's no guarantee she has enough lung (or enough breathing muscle) to survive. But then again, through many dangers, toils and snares she has already come. 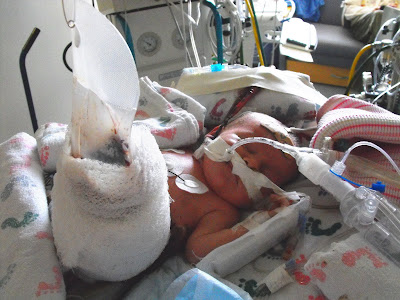 Anne Marie with her silo. In the silo (which is like a plastic bag) is part of her stomach. 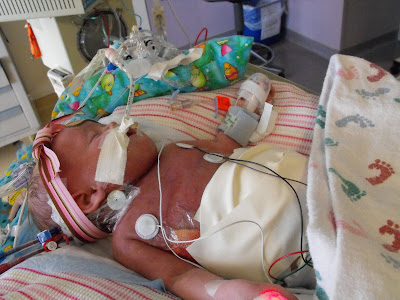 Anne Marie after surgery this afternoon. The surgeon was able to put a flat patch over the opening in her abdomen and then put a sturdy dressing on it.