Yesterday afternoon was Anne Marie's one-hour trial off ECMO. Bascially what they do is clamp the lines on the ECMO machine so that her blood is circulating through her heart and lungs rather than being circulated through the machine. During her trial off, they check her blood gases every 10 minutes. They are checking to see what her oxygen level is as well as her CO2 level.

During the last two trials her CO2 has been really high. The first time it was in the 100s and the second time it was in the 70s. A good number is about 45. Also during the last two trials her postductal number (basically showing the blood flow in the lower part of her body) had really taken a nose dive. Not only did the number go down, but her legs and feet turned gray. Yesterday when she trialed off, the doctor commented that "her numbers aren't gorgeous, but I'll take 'em." This time her CO2 level was in the 60s -- not great, but we've been told the body can sometimes adjust to this higher carbon level. Her heart rate was good, her postductal saturation number remained fairly stable, and she looked good and pink the whole time. During the trial off the doctors also didn't have to adjust the ventilator at all (which they had thought they might have to do). Her blood pressure went down some, but this can be corrected with medication. So we are cautiously pleased with how she did. Now her team of doctors will get together and discuss how she did and where we go from here. We should know more today. 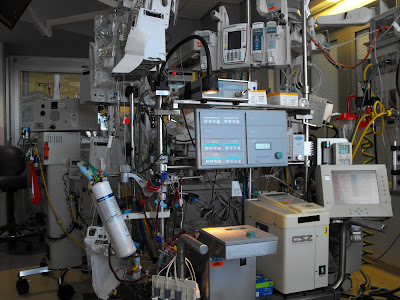 Even though yesterday's trial-off was satisfying, it wasn't the high point of the day. The high point was having Anne Marie open her eyes and look at me for about an hour. She looks around (as best she can) and tries to move her mouth, which she can't do very well because of the tape. She will open her eyes when I talk or sing to her. I could stand by her bed all day and stare at her beautiful blue eyes. 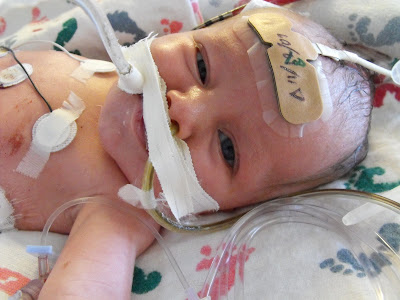