The Latest on Anne Marie

UPDATE, 2:02 PM: It turns out Anne Marie is not going to "trial off" ECMO today as I indicated in this post earlier today. The plan now is to try it tomorrow.

I imagine one of the hardest parts of being a doctor is having to sit down with parents and tell them that their options are limited or, worse yet, that there are no more options. Thankfully, in yesterday's meeting with our team of doctors they didn't tell us that they had done all they can do and that we are out of options. We were told, however, that the list of possible options is getting smaller and smaller. As I've said before, there are so many factors to all this that it is difficult to give updates and repeat every last thing we've been told. There are lots of details and so many parts that are dependent on other parts.

Today the doctors basically told us the positives and negatives of how Anne Marie is doing and where we might possibly go from here. The positives are that she came through surgery with very few complications. Her bleeding is under control. She hasn't developed an infection. Many of her "numbers" that they monitor continue to be good. They also haven't had any complications with the ECMO machine and they only had to change the circuit once. The doctors were also finally able to get a good echocardiogram, which showed she doesn't have a hypoplastic heart (which is a huge relief). We are grateful for all of these things. Some negatives are that they still haven't closed her belly and won't be able to until she comes off ECMO. Her renal function is a serious concern. Her pulmonary hypertension is still a problem, and the doctors have almost maximized the options to help with that.

Today is Anne Marie's 20th day on ECMO. The "normal" time period for a CDH baby is about 7-10 days. There comes a point where the complications from ECMO begin to outweigh the benefits of staying on, and we are getting close to that point. So eventually she is going to have to come off, and the doctors told us that it's better to do it in a controlled setting rather than having a complication arise which forces them to "crash off" ECMO. When she has tried to come off ECMO the two previous times, her oxygen level has been OK but the problem has been with her carbon dioxide (she hasn't been able to get rid of enough of it). The doctors can help with this using the vent, but if they turn the vent up much higher there is a possibility that it could permanently damage her lungs. So it's a fine line, figuring out how much to turn up the vent so that her carbon dioxide is at an acceptable level without damaging her lungs.

As of now, the plan is to have another trial run today of having her come off the ECMO machine. This time they will turn the vent up just a bit and see if she does any better. The previous times they have tried for 30 minutes and then gone back on. Every 10 minutes of so they check her oxygen and carbon level in her blood to see how she is doing. Today they are going to try to take her off ECMO for 60 minutes to see if her carbon number improves over a longer stretch of time.

The doctors have told us they aren't optimistic about things. And just by looking at her, and considering all the many complications, we understand why they say this. Even if she is able to come off ECMO, we realize she still has a long road ahead of her. We continue in all of this to ask God to help us trust Him and His purposes, knowing that all the days planned for her were written before she was even one day old. 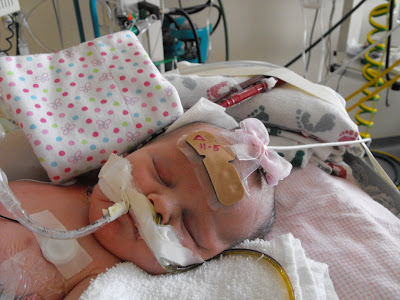