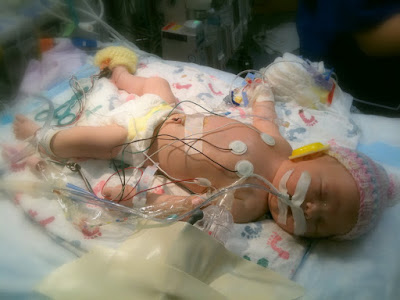 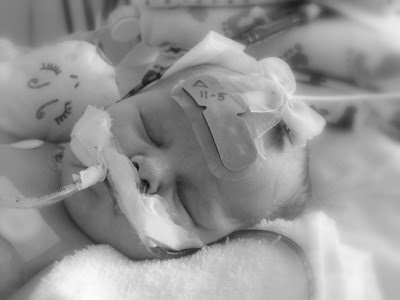 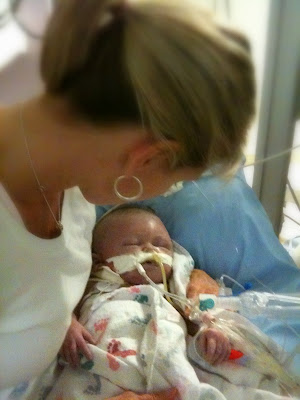 Before Anne Marie was born I read a lot about other babies who had CDH. As I would read the blogs of these CDH babies, I noticed that many times it was clear after about a week that the baby just wasn't strong enough and wasn't going to make it. Then there were other babies that at about four weeks or so could begin to be weaned off the ventilator with the hope of coming home. These babies still had a long road ahead of them, but it was a question of how long they would be on the vent rather than wondering if they were going to live. And then there were a few babies that fell in the middle. They were touch-and-go for weeks. They would do well at times and then have setbacks; it was a back-and-forth of progress and backward steps. Most of the times these babies didn't make it and it was always heartbreaking. To see these parents come so far. To see these doctors try so hard and see the babies fight for so long and then die after about six weeks.

After reading about one of these babies, I remember asking God to take Anne Marie quickly if he was going to take her. I told him that I didn't think I could make it if she were with us for weeks and I got my hopes up and then I had to let her go. The pain that these parents went through, the weeks in the hospital fighting so hard, thinking their baby was going to come home only to have to say goodbye. I just didn't think I would make it if I had to do that.

And now, I hate to think what would have happened if God had answered that faithless prayer. The days and weeks I would have missed with Anne Marie. Those 37 days in the hospital were some of the hardest and best days of my life. I wouldn't wish that pain on anyone and yet I wouldn't trade it for anything.

And now it has been three months since our girl took her last breath that night and went to heaven. I know that each day brings me one day closer to heaven and to seeing her again, and yet it is also one day farther from the last time I was with her. I find myself in the middle -- so far away from her on either side.

I'm remembering you today, Anne Marie. I still remember what you felt like in my arms, how your skin felt on my lips. We love you and miss you every second of every day.
Email Post
Labels: Baby