Feeling a Bit of a Draft in Here

In last week's NFL draft, three of the top four players chosen were Sooners. Sam Bradford (pictured below with Lincoln) was the first overall pick. 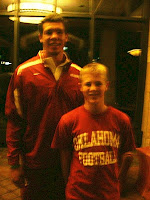 Gerald McCoy (pictured below with Susie) was the third player selected. 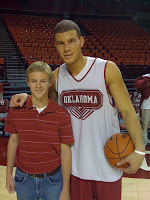 And just for good measure, even though he was drafted in 2009, I can't resist including this photo of Phil Loadholt, simply because he so ridiculously massive.