Here's Lookin' at You, Kid

The night Anne Marie died, a photographer from Now I Lay Me Down to Sleep came to the hospital to take pictures of Anne Marie. This wasn't something we had planned beforehand, but providentially a new friend of ours asked if we wanted to have pictures taken, and it worked out that a photographer was able to come that night. I love these pictures. They are the only ones I have had of Anne Marie that don't have tape or tubes covering her face. They are the only pictures I have of Mary Margaret cradling her baby sister. And they are a reminder of that last night with her. I look at these pictures and I remember giving Anne Marie her first and only real bath, dressing her for the first time in her little pink dress, and sitting with Brandon in Anne Marie's room holding her and never wanting to let go. I was able to touch her tiny body all over and kiss her lips that had before had been covered. 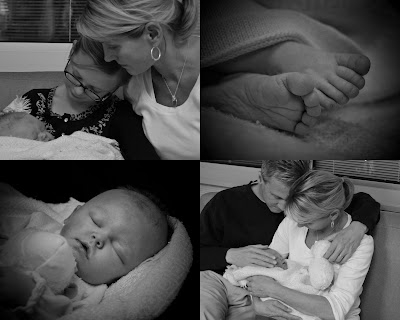 These pictures are priceless, and yet because she was so swollen that last day, they don't look exactly like she really looked before she became so puffy. When I think about Anne Marie, I think about her the way she looked when she would open her eyes and gaze at me. I picture her when she wasn't swollen and puffy and when she would wiggle her fingers and move her arms back and forth. On her last day she was so puffy that her eyes were almost swollen shut. I remember late on that Saturday afternoon standing at Anne Marie's bed talking to her and stroking her and hoping and praying that she would open her eyes one more time. I didn't think she would be able to, but I so wanted one more look. And she did. She cracked open one of her little eyes and looked at me. It seemed to take so much effort, but she did it. I won't forget her peeking out at me through her little swollen eyelid, nor will I forget the photographer who came up to the hospital late on a Saturday night to capture memories of that last night with Anne Marie.
I also didn't think I would have any more pictures of Anne Marie without tubes and tape -- until yesterday, when Brandon brought me this: 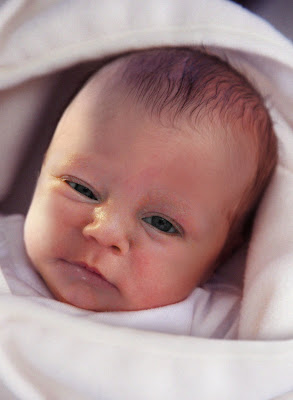 A picture of our girl -- soft, peaceful, looking right at me.

Brandon's friend Chris worked on Anne Marie's picture for several hours and was able to photoshop the tubes and tape out of it. I have been gazing at this picture off and on all last night and this morning. Every time I come back to look at it, it takes my breath away just like it did the first time I saw it. She is so, so beautiful and looks so peaceful.

I continue to be so grateful for all the people who have blessed us, and this picture I will treasure all my life.
Email Post
Labels: Baby Friends and Family