In Democracy in America, Tocqueville warned that if despotism were to come to America, it wouldn't be your garden-variety despotism. "It would be more extensive and milder, and it would degrade men without tormenting them." He speaks of a "regulated, mild, and peaceful servitude" which "does not tyrannize, it hinders, compromises, enervates, extinguishes, dazes, and finally reduces each nation to being nothing more than a herd of timid and industrious animals of which the government is the shepherd." 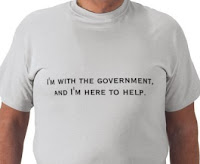 Comes now Mr. Neil Brannon of Arkoma, Oklahoma. A former school principal and superintendent, the avuncular and well-meaning Mr. Brannon represents District 3 in the state House of Representatives. On May 21, Rep. Brannon, a Democrat, argued against legislation which would give more school choices to parents of special-needs students.

Now in some cases, the benevolent solon from LeFlore County magnanimously allowed, mothers and fathers "know what's best for their child." Yes indeed, in some cases, mothers and fathers are actually "very good in making decisions about their child." But in other cases, he warned darkly, "I've seen students with disabilities where the parents had disabilities also. Are they really the ones that ought to be making the decision about where that child goes?"

One can only speculate as to what's going on in Arkoma, what reproductive practices and resultant disorders are fueling this multi-generational cycle of unreliable decision making. I find it difficult to believe it's a widespread problem. And I find it difficult to believe I'm the only Oklahoman who resents the paternalistic impulses of a politician (Tocqueville warned of "an immense tutelary power" which would take charge of watching over us) -- especially when that politician hails from a town where the high school's average ACT score is 18.1. It's altogether possible, Rep. Brannon, that we are grown men and women in a free society and that we can get along just fine, thank you.

The simple truth is that Rep. Brannon wants politicians and bureaucrats -- not parents -- to choose what's best for children. Because given a choice, parents may well head for the exits of their local public school. And "I don't think we need to open the door, to just throw it wide open," he says. After all,


Parents "may think they know what's best, but do they?"

Wow. Gotta admire the candor. Bless his heart for just saying that right out loud on the House floor.

All of which leaves me with a very important question for Rep. Brannon. If the parents of House District 3 aren't capable of choosing a good school for their children, how can they be trusted to choose a competent official to represent them in the Oklahoma House of Representatives?
Email Post
Labels: Education Public Policy