Oh, Baby, That Would Be Ironic 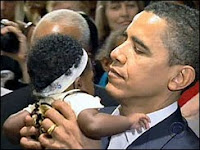 Barack Obama, the man who famously wouldn't want his daughter punished with a baby, is the most pro-abortion president in U.S. history. (As a state senator, he even voted against legislation which would have protected living, fully delivered babies who somehow managed to survive an abortion.) ObamaCare, if left standing, will probably result in the largest expansion of abortion since Roe v. Wade. Indeed, the onslaught is already beginning.

But wait. Could the Supreme Court find ObamaCare unconstitutional? The case will be decided by a Roberts Court, bequeathed to us by President George W. Bush, whose election was made possible because for three decades Democrats have been aborting their own voters.
Email Post
Labels: Culture Wars Public Policy