'What They Really Need Is You'

"Can the astonishing popularity of Indiana's penny-pinching governor carry him to the White House in 2012?" Andrew Ferguson asked in a recent Weekly Standard cover story ("Ride Along with Mitch"). It's a very good article, with an appropriate anecdote just in time for Father's Day.


After the ceremony at North Central High School, Daniels got back on the bike, but only for a minute or two. The troopers told me he is given to random and themeless stops, and on travel days his staff puts enough slack in the schedule to make them possible. He pulled into the parking lot of a McDonald's for coffee, and for a chance to review a backgrounder about the next event. 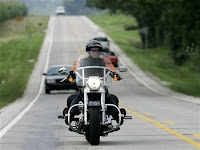 Heads whipped around as he shuffled to the counter. His walk is a bit like a cowboy's, shifting noticeably from side to side as he advances, bowlegged maybe from a lifetime of Harleys. He never encounters a citizen without trying to shake his or her hand, and they react as though they can't believe their luck. He got his coffee and moved to the back of the restaurant where all the booths but one were empty. He homed in on the booth with citizens in it, a pair of unkempt young men in wifebeaters hanging loose at their shoulders. Both had pony tails.

They looked up, annoyed at first until they recognized him.

"We are having breakfast with the governor!" one of them cried, yanking on the bill of his cap.

"You have got to be sh..." said the other, stopping himself, "foolin' me! You on the bike this morning?"

On the table was a mountain of balled up wrappers. Daniels pushed it aside to make room for his cup. He told them where he'd just been, where he was going, and asked the same of them, and they told him.

They were roofers stoking themselves with five or six Sausage McMuffins before getting to the job. The governor asked whether the building trades were picking up. They were extremely genial and had no more than a dozen teeth between them.

"I'm having breakfast with the governor!" the first one repeated.

"You all got families?" Daniels asked.

The roofers looked at each other.

"I got kids, yeah," the first one said. "They're with their mama. I just got single again."

"Well, governor, me and my kids' mama, we were together for like five years ..."

"I do take care of them, I go without so I make sure they got everything they need."

"Well, that's good," Daniels said. "I guess. But what they really need is you."

The man dropped his head and swung it back and forth.