Does the KFOR Boss Think His Viewers Are Undertaxed?

"Oklahoma lawmakers might be in for a pay cut next year," Dale Denwalt reports for The Oklahoman
("Lawmakers' 'performance' could trigger a cut in pay").


The panel in charge of setting legislator salaries said it will meet again soon to talk about lowering the compensation paid to the state's 149 representatives and senators. ... Wesley Milbourn, chair of the Legislative Compensation Board having been appointed by Gov. Mary Fallin, said it's a discussion about the state economy, budget, and the legislative stalemate over revenue.

“There's many people, including many Oklahomans, who are disappointed with the legislators' performance,” said Milbourn, president and general manager for the KFOR-4 and KAUT-43 TV stations. “With the state in the shape it's in, Oklahomans are looking at our legislators as not performing very well.” ... “People are just kind of fed up with how things are running, and legislators ought to be held accountable,” he said. “The board's keeping an eye on the legislators, in the best interests of Oklahomans. That's the message there.”

Now I would agree that our legislators are "not performing very well" when it comes to tax and fiscal policy. I would argue that this has been the case for several decades (see chart below). Oklahomans' taxes are too high and their state government is too big. 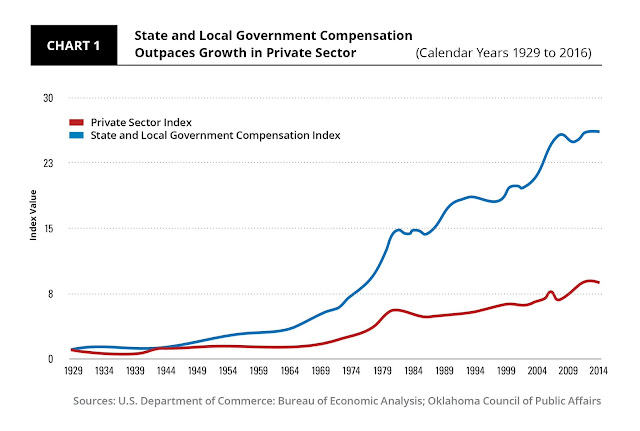 Many Oklahomans agree. Indeed, by a margin of better than 3 to 1, Oklahoma voters believe that "despite recent cuts to government agencies, our colleges, and our schools, there is still enough waste in state government that we can cut more spending and not raise taxes." You might say people are "fed up" with big government.

So what exactly does Mr. Milbourn mean when he talks about a revenue stalemate? Is he implying that politicians need more tax revenue? What exactly does he believe is "in the best interests of Oklahomans"? It certainly sounds like he's taking sides on an issue which his reporters are supposed to be covering objectively and about which his viewers have many different opinions.
Email Post
Labels: Media Public Policy