New York Times Memo: Reporters Must Have 'Neutrality and Fairness' on Social Media

"The New York Times on Friday released new social media guidelines for its reporters, requiring them to avoid any actions that would lead to perceptions of bias or otherwise damage the paper's reputation," The Washington Free Beacon reports. Times executive editor Dean Baquet correctly told his reporters that if they are perceived as biased on social media, "that can undercut the credibility of the entire newsroom."

It's not just national reporters who show their bias on their social-media feeds. Do yourself a favor and look at the Twitter feeds of some reporters at the Tulsa World, The Oklahoman, and other media outlets in Oklahoma. Their Twitter posts are instructive, as are their "likes" of other people's posts. Some examples are below [this blog post is regularly updated with new examples]. As respected journalist Bobby Ross, a veteran of the Associated Press and The Oklahoman, perceptively noted, "I fear that social media has exposed the bias of some journalists. It's hard to see constant attacks on a particular side and then view the person as impartial."


Journalism *is* activism in its most basic form. The entire basis for its ethical practice is the idea that a democracy requires an informed citizenry in order to function. Choosing what you want people to know is a form of activism, even if it’s not the march-and-protest kind. https://t.co/e1JfES3ciA
— Matt Pearce 🦅 (@mattdpearce) March 26, 2018


Check out this snark from Ben Felder, an education reporter at The Oklahoman, replying to OCPA president Jonathan Small. (Just for fun, try to imagine the reporter talking like that to a liberal source, such as OEA president Alicia Priest.)


I am a reporter who gets reader comments all the time. I've heard you and will consider like always. If you're not happy with my response I'm sure you could write something on your "investigative reporting" site. Thanks for reading.
— Ben Felder (@benfelder_okc) March 9, 2018


Then again, he shows this sort of disrespect to his own colleagues who are conservative and who have the nerve to express the views held by the guy who actually, you know, owns the newspaper: 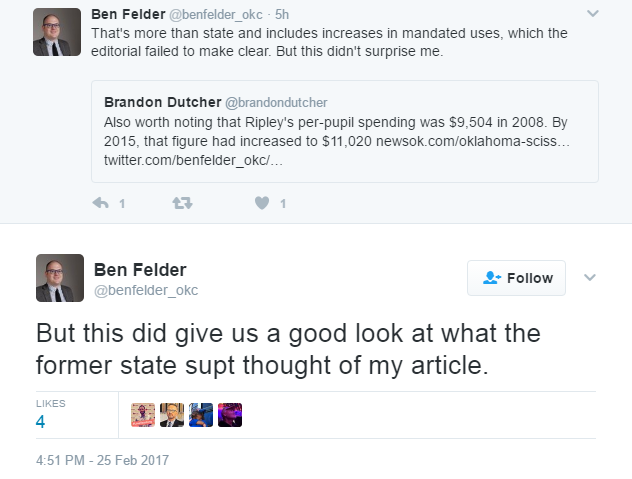 Sadly, Felder isn't the only reporter at The Oklahoman willing to show disrespect for the editorial board (even after the paper changed hands in September 2018). When one local citizen lamented "the grossness" of The Oklahoman's editorial board," the post drew "likes" not only from the expected assortment of liberal activists but also from The Oklahoman's own reporters Dale Denwalt, Steve Lackmeyer, and Ben Felder (as well as Oklahoma Watch reporter Paul Monies):


I still support @TheOklahoman as a subscriber because the stories her reporters tell are important and valuable, despite the grossness of the editorial board.
— ѕнєℓℓєу вσσ! 🎃 (@shelleridge) October 22, 2018


According to the Society of Professional Journalists (SPJ) Code of Ethics, journalists should "avoid political and other outside activities that may compromise integrity or impartiality, or may damage credibility." But hey, having an assistant editor who crusades for same-sex "marriage" surely has no bearing of any kind on the Tulsa World's news coverage:

Here a reporter blithely labels as "homophobic" the view that has been traditionally embraced for 2,000 years by Christians of virtually all branches," including one from whom the reporter happily cashes a paycheck: