As a junior at Bartlesville High School in 1982, I was a member of the first-ever Bru Cru student section that cheered on the Bruins, and I'm still a Bartlesville fan today.

But I very much enjoyed seeing my son Jack Henry (himself a high-school junior) and his fellow homeschoolers prevail over my alma mater today in the Bruce Gray Invitational Tournament, held annually at Deer Creek High School. I didn't even mind that The Oklahoman misspelled Jack Henry's last name in the box score. 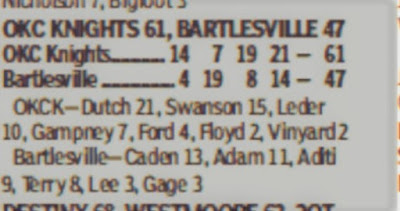 Here's Jack Henry hitting a corner three against the Bruins: