"The Mavericks and Thunder suited up to play a basketball game just over 24 hours after the tragic news broke on Sunday that NBA legend Kobe Bryant, his daughter, and seven others were killed in a helicopter crash in California," The Dallas Morning News reported tonight. "As several other teams that played the day before, the Mavericks and Thunder paid tribute to the fallen legend during and before the game."

"Emotions were raw," the paper reported. I knew they would be. Still, I was surprised when I looked at Mavericks guard Luka Doncic during the Thunder's opening possession, not 12 feet away from me, and he was crying. "Players’ feelings about Bryant were evident throughout and after Monday’s game," the paper reported. "Carlisle said that Doncic became upset after the first quarter and had to be consoled. Doncic admitted, 'I broke down. That’s when it hit me. It was really hard to play through.'"

He's such an amazing talent that it's easy to forget that he's a 20-year-old kid. 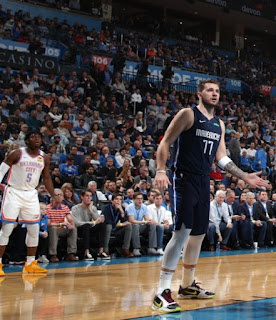 But the game got under way, and 8-year-old Oliver and I really enjoyed it. Especially this dunk:

In the pregame warmups, Oliver even got to do some camera work of his own:

We also enjoyed watching Steven Adams get some pregame work in:

Even the halftime show was terrific: