Putting the 'Quit' in 'Equity' 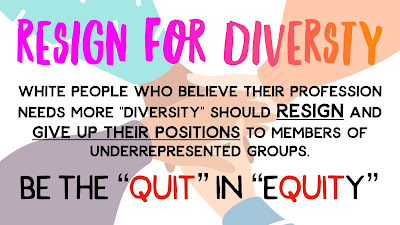 White evangelicals "have got to be willing to surrender power," Southern Baptist seminary president Danny Akin once helpfully suggested. "Not only do we need to invite ethnic minorities into our room and to have a seat at the table, we even need to be willing to surrender leadership at the table if we’re really going to make progress and really help our brothers and sisters understand we see them on an equal plane with ourselves."

Forbes columnist Jack Kelly agrees, saying bluntly that "to fight systemic racism, CEOs and high-profile professionals should step down and offer their jobs to people of color." As Noah Carl put it in a paper for the National Association of Scholars: "If you’re in favor of more 'diversity,' how come you haven’t resigned?"

To their great credit, some of my fellow beige-colored Americans actually have the integrity and courage to walk the walk.
For example, Oklahoma State University teaching assistant Jessica Bridges—informing us that "racism originates with and is perpetuated by White people" and distraught over her own "internalized white supremacy"—says she plans to do her part for the cause by not teaching Spanish.
Matthew Dowd ended his campaign for lieutenant governor of Texas—and hinted that Robert Francis O'Rourke should end his campaign for governor?—saying "white male Christians" like himself must "take it upon ourselves to step back and give more people who don't look like us access to the levers of power."
One Greta Thunberg-inspired climate organization branded itself racist and disbanded.
Boston Pride, lamenting its own "systemic and structural racism," also disbanded.
Jaime Grant, a "queer feminist sex activist" (don't ask), declares: "White people, it's time to resign. I did."

And so did this PCA teaching elder. He says he resigned as the senior pastor of his church to make way for "minority voices." Here's hoping more and more pallid Presbyterian progressives will push pause on their performative preening and precipitate the passing of their privileged paychecks.