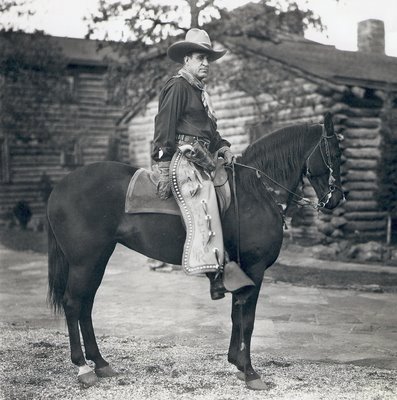 Rummaging through an old family scrapbook recently, I came across a yellowed newspaper clipping headlined "Henry Wells, Old-Time Bank Robber, Dies at 82." The Tulsa World reported from Bartlesville nearly 43 years ago that "Henry Wells, 82, an old-time outlaw who robbed 32 banks, died Thursday night in a Bartlesville hospital. Wells, a familiar sight here with his handlebar mustache, was tried 14 times but convicted only once. ... In later years, although it was rumored he had caches of loot hidden, he lived on an old-age pension and side bets on pool games.

"Wells, a 6-foot, 200-pound man, took credit for preventing Charles (Pretty Boy) Floyd from kidnapping Frank Phillips, Bartlesville oilman, in the 1930s. He said he tipped Phillips' employees at Woolaroc Ranch that the kidnapping was planned. 'It was the only time I ever ratted on any of the boys,' he said. 'But I told Pretty Boy I'd rather somebody would have kidnapped my daddy than Frank Phillips.'" (Phillips is pictured above at Woolaroc.)

Tucked in the scrapbook alongside the newspaper clipping I found something else of interest -- a note my great-grandfather, Don Tyler, had written the week after Wells's death:


Newspaper items under Bartlesville headline dated November 1, 1963 tell of the death of Henry Wells, 82-year-old confessed bank robber, and brought to mind an incident which I experienced as follows:

Some time in the early 1930s Mrs. Tyler and I were the guests of Jane and Frank Phillips at Woolaroc Lodge for dinner and after visiting some time on the porch we both decided to leave for home. To my surprise, Frank asked if he could ride in with us, although he had a limousine standing by with a driver. Frank never drove a car himself.

I thought it unusual at the time that he should ask to ride in with us under the circumstances. Subsequently as we descended in the middle of 39 hill on the way home we noticed a broken down truck was wedged across the road. When the lights flashed on this truck Frank immediately became very much excited and insisted that I drive onto the shoulder and get around the truck the best we could, although we almost turned over.

I didn't ask Frank to explain his action but elicited from his brother, L.E., the next day that Frank had had a number of threatening kidnapping letters, which were similar to the famous Urschell kidnapping in Oklahoma City.

Referring to Henry Wells again, he claimed that he prevented Charles (Pretty Boy) Floyd from kidnapping Frank Phillips, which ties into the above incident. Outlaws considered Frank a "sitting duck" while at the Woolaroc Ranch, considering the isolation of the ranch and Frank's immense wealth.

Two things of interest: First, even though Frank Phillips was an oil baron with hundreds of Phillips 66 gas stations, the man never learned to drive a car.

Second, it's interesting to note that some outlaws (like Wells) genuinely liked Frank Phillips. Frank himself was fascinated with Old West bad guys, and even threw an annual shindig at the ranch called the "Cow Thieves and Outlaws Reunion" at which the bad guys commingled with lawmen. Frank's ground rules for the event were that everyone had to check his guns at the gate and that the outlaws enjoyed a grace period while there at the ranch; lawmen could not arrest them on the premises (after all, this here's a party) but would have to try to apprehend them at another time and place.

Here's one more interesting photograph I found. On the right are Frank Phillips and his wife, Jane. Standing at left is K. S. "Boots" Adams, who took the reins of Phillips Petroleum when Frank stepped down. (Lincoln has a funny anecdote concerning Boots in this post.) Boots' son, Bud Adams, owns the NFL's Tennessee Titans (formerly the Houston Oilers). 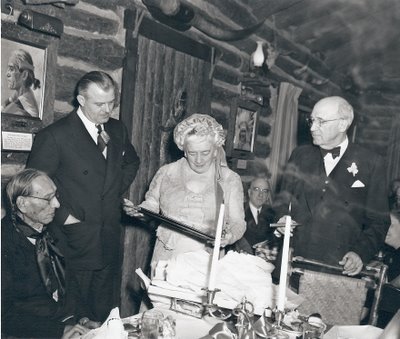