For another former Sooner, the stat line (2 points, 2 assists, 1 steal) wasn't overly impressive. Until you consider that he's 74 years old.

In all, it was a pretty good showing for my uncle Bill, who's pictured here with Buddy Hield in The Oklahoman's coverage of the game. (Heck, Bill and Buddy are practically old buddies: Bill, pictured below in the blue Thunder hat, invited Buddy to sit with him last year so Buddy could see his idol Kobe Bryant's final road game.) 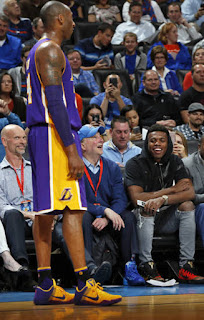 I've long been a Buddy Hield fan myself, even more so after his kindness to my son Jack Henry last year.

The night before the OU alumni game was the alumni banquet. Ollie thought it was cool to talk to Coach Kruger and to sit in one of the actual chairs that had been courtside for the teams in the Final Four. Also, I let him splurge and have two red-velvet cupcakes for dessert. 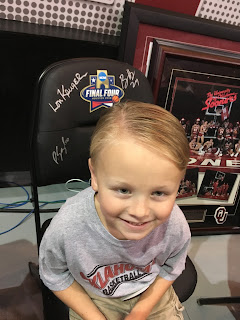 Earlier in the day was OU Basketball's 28th Annual Golf Classic. Bill didn't play, but his Dutcher and Company team won first place thanks to my son Lincoln and three of his pals: 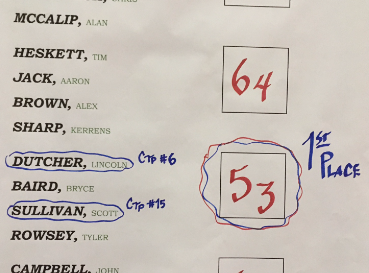