No Use Counting Chariots 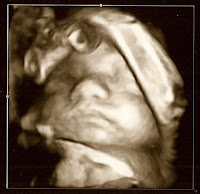 Posted above is the most recent picture of our daughter, taken yesterday in Houston. She's about 27 weeks along, and weighs 2 pounds 5 ounces.

As some of you know, baby has what's called a congenital diaphragmatic hernia (CDH). The diaphragm is the breathing muscle – a sheet of muscle that separates the chest cavity from the abdominal cavity. The picture on the left shows what a normal chest cavity looks like.

For reasons we don't understand, baby has a hole in her diaphragm. So, some of the contents of her abdomen (stomach, intestines, etc.) have taken the opportunity to move through the hole and into her chest. As you might surmise from the picture on the right, this overcrowding in the chest cavity is a problem, mainly because it impairs the development of the lung, which leads to pulmonary hypertension and other problems. Right now baby's just fine. She has no idea anything is amiss. But once that cord is cut, she's going to have a heck of a time breathing.

Yesterday in Houston, Susie and I met with an obstetrician, a radiologist, a cardiologist, and a pediatric surgeon. Going into these meetings, we had read enough to know that if baby's lung-to-head ratio is such and such, and the liver is down in the abdominal cavity rather than up in the chest cavity, then the baby's chance of survival is such-and-such percent. So of course we were hoping that the ultrasounds, MRI, etc. would bring good news.

Well, it turns out baby's lung-to-head ratio is 1.3. That's pretty good. But her liver, at least part of it, is up in the chest cavity. That's not so good. Total lung volume? Not great, but could be worse. This indicator, so-so. That indicator, fair to partly cloudy. It's just hard to get a handle on it, and harder still to predict what's going to happen. The doc suspects baby will spend at least six weeks in the hospital. He estimates her chance of survival at 65 to 80 percent.

But let's say the doc had given us terrific news yesterday. Let's say he had pegged baby's chance of survival at 95 percent. Is that really something to hang one's hat on? John Piper has an excellent article entitled "Don't Waste Your Cancer." Below I've taken the liberty of substituting CDH for cancer.


The design of God in your [CDH] is not to train you in the rationalistic, human calculation of odds. The world gets comfort from their odds. Not Christians. Some count their chariots (percentages of survival) and some count their horses (side effects of treatment), but we trust in the name of the Lord our God (Psalm 20:7). God's design is clear from 2 Corinthians 1:9, "We felt that we had received the sentence of death. But that was to make us rely not on ourselves but on God who raises the dead." The aim of God in your [CDH] (among a thousand other good things) is to knock props out from under our hearts so that we rely utterly on him.

And honestly now, isn't this true of life generally – for all of us? I mean, I could get hit by a truck tomorrow – and so could you. One of my other children could contract a fatal disease tomorrow – and so could yours. Baby could have a 95 percent chance of survival, but then as a toddler could get struck by lightning. The whole of the Christian life involves walking by faith and not by sight. There's no getting around it.

So although I'm interested in ratios and volumes and percentages, I'm not getting bogged down in them. Good percentages can suddenly go south. Bleak prospects can quickly brighten. Life is a marathon, not a sprint, and God is in complete control of every step. Here's Andrée Seu, writing to her 7-year-old daughter:


Let's play this out; how are you at seeing around corners: hated by your brothers, sold like an old Beanie-baby, orphaned like a kitten, a teenage slave. Isn't that bad, darling?

No, it's good! He ends up the household manager of Pharaoh's captain of the guard!

Isn't that good, Aimée? No, it's bad: Potiphar's wife frames Joseph and he lands up back in jail.

Isn't that bad, Aimée? No, it's good! In jail he hears important dreams that land him as Pharaoh's vizier. Strands of history and geography woven together by a skillful hand, and Joseph saves his dad and brothers, and counts his former troubles but a pittance on the scales.

"The end of a matter is better than its beginning" (Ecclesiastes 7:8). The last chapter is what counts, isn't it? Between the covers of the book, knights will fall, pawns will be sacrificed, bishops will topple and be toppled, rooks will come and go – all those great upheavals and reversals Mary saw in the Spirit, singing her Magnificat.

The faithfulness of God is why the perseverance of man (and little girls) is so important. What you're seeing now is middles, freeze frames, the crest of the curve and not its falling arc, the ball as it looked snapped in mid-air by your Polaroid. But "You have heard of the perseverance of Job and have seen what the Lord finally brought about. The Lord is full of compassion and mercy" (James 5:11).