The Grief Has Settled In

A year ago tonight, Brandon and I were in Houston. It was the night before our tour of Texas Children’s Hospital, a day of tests and meetings with doctors. I remember that evening in Houston. We had gone to the Galleria to pass the time and eat dinner. Later, back in our hotel room, it felt strange being in such a large city doing what we were there to do. I remember being sad, just so sad.

That next day I had test after test (a fetal MRI, at least three ultrasounds, a fetal echocardiogram), and we met with many doctors and toured Texas Children’s and their NICU. We got the results of the tests -- results that at the time were disheartening but which I would have taken in a heartbeat after Anne Marie was born because her condition was much worse than the tests had revealed.

Several weeks later we would take a similar hospital trip all over again, only this time to Children’s in Dallas. In the midst of our journey last summer and fall there was sadness, yet at the same time there was hope. Hope that our girl would make it. Hope that at the end of all our tests, planning, waiting, and praying, we would bring Anne Marie home.

And today it has been eight months since Anne Marie was with us – I still count the days, weeks, and months. There are so many “milestones” that have passed -- Christmas, Easter, summer, Mother’s Day, Father’s Day. And there are still a few left -- her first birthday, one year since her last breath. I've found that in the past few months there has been a change -- the sudden, breathtaking, punched-in-the-gut feeling is gone, replaced with something not as sharp and sudden, but something deeper. The grief has settled in and become part of who I am.

There was a time when I might have thought this wasn’t the way it was supposed to be for a Christian. I might have thought that the sadness would last for a while and then over time might ease up. Even as I type that it seems so silly -- as if being a Christian makes the sadness of losing Anne Marie less severe. Yes, in the midst of that sadness there is comfort, but there is still a deep, deep sadness that will never go away. I miss Anne Marie. I am sad she isn’t with us. I will miss her next year and the year after that. Each Christmas and Thanksgiving and birthday I will miss her and when we sit around the dinner table I will miss her.

It's been a hard summer -- one of remembering and feeling as if my hope is slipping. There are still times when God seems so quiet and far away, and yet I know He isn’t. Not long ago on this blog a friend of mine left a comment: "In his book Beside Still Waters, Charles Spurgeon writes, ‘When the Lord takes a child, there is one less cord to fasten you to this world and another band to draw you toward heaven." I feel that so strongly. Even when I don’t “feel” God, more than ever I feel myself drawn towards heaven. 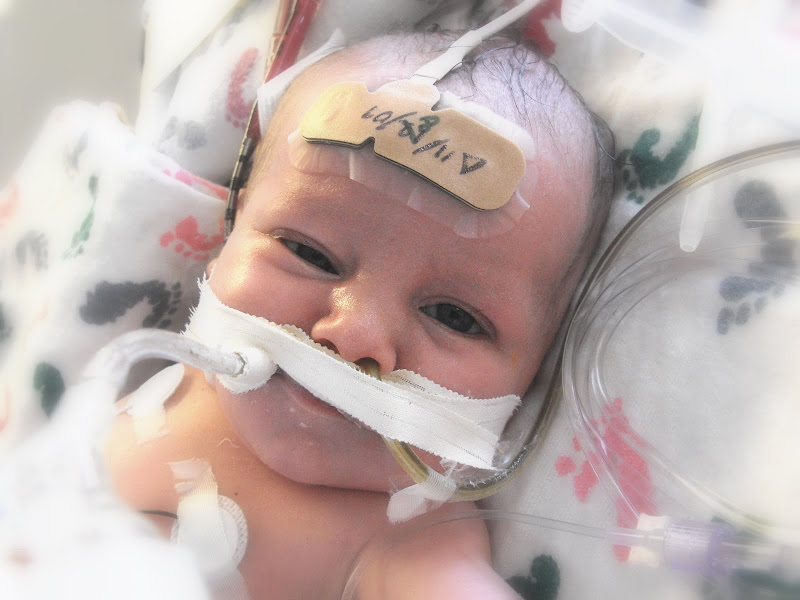 I’m remembering you today, Anne Marie. Your bright eyes that peeked at me one last time on that day when Christ welcomed you into his arms. And, selfishly, I wish you could have stayed longer in our arms.
Email Post
Labels: Baby